On my meeting with the Choreoroamers after their Bassano sharing I gave them an assignment: they should write about the sketch they had just presented in the view of a certain issue I individually gave them.

I gave the issue of accumulation to Irena Mikec. At first she wouldn’t recognise it as relevant in her piece, but then she understood it as a means to convey ideas about her work.

Here is what she wrote.

Accumulation (related to my work shown in the sharing)

Sharing A and B version of the same sketch:

If seen or experienced through the eye of the spectator, a dance piece comes down to perceiving information that accumulates through a time frame. Does the maker manipulate this perception and how? How do these choices come about through a creative process?

As the creative process starts, it can evolve in many different ways, but in my opinion, to simplify it, there are 2. One way is to start from a wider theme that is open for interpretation and then, through a process, narrow it down, filter it or focus it on something specific. I refer to it as “zooming in”. Or as its opposite, „zooming out”: which is starting from something very specific, defined or small and then linking it, letting it grow and connect into a bigger picture, bringing all the elements on stage together: body, visuals, sound elements… neither of these2 is absolute and many times they can relate and be intertwined.

For the sharing in Bassano, I decided to go for a “zoom out” process, which came naturally as I took Yasmeen Godder’s 3 days workshop as a source. Working with the movement research tools she offered, we Choreoroamers all went through an intense personal (both emotional and physical) experience. How does one expand such an experience into a set choreographic idea that grows in all the performative elements?

Few ideas popped up. I had a need to continue with the intuitive exploration and investigate how the movement comes out of and relates back to the environment around. I took the one-word feedback I received from everybody in the workshop to generate movement ideas. It was a seemingly random set of words but all came from artists who went through the same workshop as I did, together in the same time and space. This shared experience unified the group and made the offered words less random. I integrated these one-word feedbacks into my research and created an improvised solo. “Zooming out” some more, out of my own intuition and body, I went further. I invited my colleagues to assist me on stage and build the space around the solo. They were given the task of observing the movement and bring to space an object that was inspired by the movement. They were also asked to place the object in space in relation to the soloist with an intention to build a room. So, intuitive became physical, physical became material, material connected to the environment. I used accumulation of transformations. Transformations being links and associations, reactions and impressions.

For the B version of this scene I decided to take the soloist out of the newly created “room” and challenge the colleagues to become guests of the landscape they created. Their movement was linked to the one-word feedback that they wrote down in the A version of the scene and left behind in the space (like thoughts left behind in the room). These written ideas were collected and the guests/choreographers took one out of the bunch, as a lottery. I liked the idea of individuals investing and offering something that later in time comes back to them. So, in my B version the performers accumulated. Out of a one solo, there became more solos: like a multiplication of the body already seen in the first part. The original soloist left the newly created space. Landscape of thoughts, words, states, images, observations and objects. Guests/choreographers were challenged to enter this space, connect the one-word feedback they got to a physical experience and express it in the body. They were invited to position themselves in space, in connection to the objects, to what they’ve seen before, what corresponds to the word they’ve read or in connection to the other people in the group. This way they became an organic part of “the room”. The sound was a call for their reaction, a point of reference for starting the movement. This was connected with an idea that the sound “turns the room on”: like a form of energy that the bodies in the room hear and react to. When the sound fades, the movement fades from the performers, and their bodies empty to a neutral state. This action is repeated several times, to confirm the idea of “on and off”.

We built the space from a thought, becoming physicality, becoming objects, becoming ideas of more people, becoming more people in the same space, becoming individual movement ideas, linked to the identity of the created landscape. So, the  “growing”, “building up”: brick by brick, thought by thought, movement by movement, body by body.

It has been quite a hot sharing today, almost 40 °C and a very rich programme: 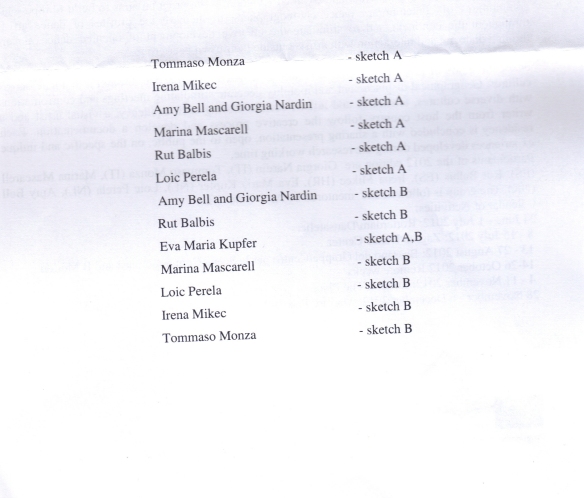 And here is a gallery of a few sketches, just to give you a taste of today’s sharing:

Today at 3 pm, at the CSC Garage Nardini in Via Torino, Bassano del Grappa, the Choreoroamers will share the research they have developed during their Bassano residency.

The sharing is open to the public, and the admission is free. Needless to say, this is neither a formal show, nor a finished product, but a moment in which the choreographers generously reveal what they have been engaged with.

At the end of the showing the audience will be able to talk with the choreographers, provide them with some feedback and ask them questions, for example about the journey that brought them there.

Or maybe the Choreoroamers themselves will ask questions to the audience…

Three of them chose Bosch’s Visions of the hereafter as their first inspiration, others chose a photograph from the temporary exhibition at Palazzo Grimani, one of them started his reflection from a somptuous tiled fireplace…

What will still be there once they empty their vessel of its earlier material? How will they fill it again?